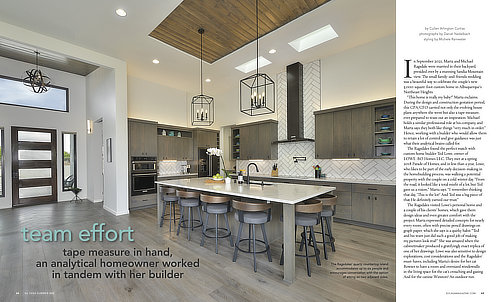 The Ragsdales found the perfect match with custom home builder Ted Lowe, owner of LOWE-BO Homes LLC. They met at a spring 2018 Parade of Homes, and in less than a year, Lowe, who likes to be part of the early decision-making in the homebuilding process, was walking a potential property with the couple on a cold winter day. “From the road, it looked like a total misfit of a lot, but Ted gave us a vision,” Marta says. “I remember thinking that day, ‘This is the lot!’ And Ted was a big piece of that. He definitely earned our trust.” 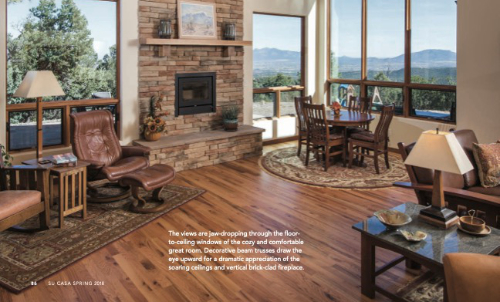 The lodge-like home built by Ted Lowe of Lowe-Bo Homes was meant to be a weekend getaway until the Bohnhoffs could move to Sandia Park permanently. But when Hank was appointed a judge on the State Court of Appeals in January 2016, his hectic schedule made it impractical to keep two homes. Since his commute had shifted from Santa Fe to Albuquerque, the drive was doable even from this remote location, so the Bohnhoffs sold their house in town and moved 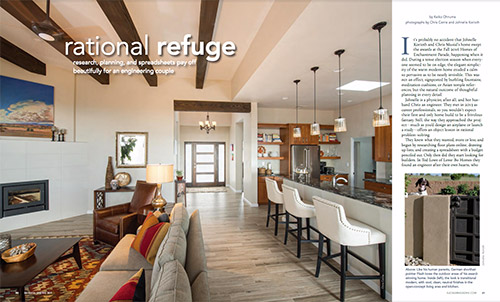 They knew what they wanted, more or less, and began by researching floor plans online, drawing up lists, and creating a spreadsheet with a budget penciled out. Only then did they start looking for builders. In Ted Lowe of Lowe-Bo Homes they found an engineer after their own hearts, who not only built the type of home they wanted, but, as Johnelle says witha laugh, didn't freak out when they walked in with their spreadsheet.

"They brought or sent in four pages of stuff in a questionnaire format," recalls Lowe, a veteran, award-winning Albuquerque homebuilder. He rolled up his sleeves and dug right in. The three spoke the same language, and ended up as good friends — a compatibility that can be felt in the easy tranquility of the transitional Southwester home. 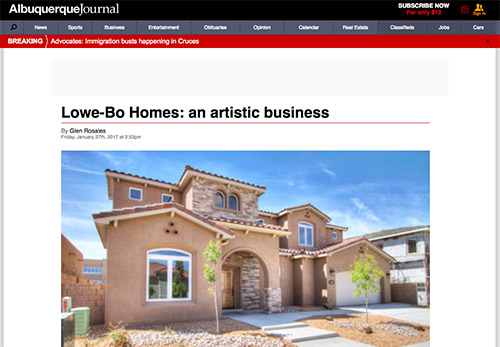 Seeing one of his homes emerge from the ground to completion gives Ted Lowe of Lowe-Bo Homes a certain thrill inside. "I look at building as an artistic business," he said. "A lot of people don’t realize that. They just think construction. Sticks and bricks." But there’s a lot more to it, Lowe said.

Building is an art 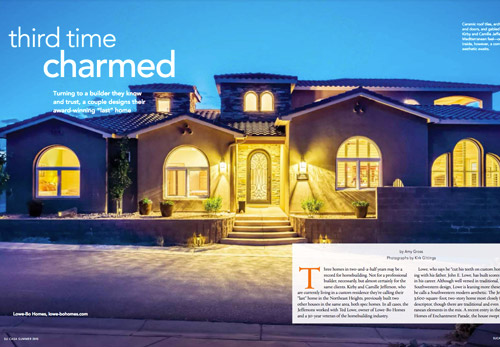 Three homes in two-and-a-half years may be a record for homebuilding. Not for a professional builder, necessarily, but almost certainly for the same clients. Kirby and Camille Jefferson, who are currently living in a custom residence they’re calling their "last" home in the Northeast Heights, previously built two other houses in the same area, both spec homes. In all cases, the Jeffersons worked with Ted Lowe, owner of Lowe-Bo Homes and a 30-year veteran of the homebuilding industry.

Lowe, who says he "cut his teeth on custom homes working with his father, John E. Lowe, has built scores of residences in his career. Although well versed in traditional, Tuscan, and Southwestern design, Lowe is leaning more these days to what he calls a Southwestern modern aesthetic. The Jeffersons' 3,600-square-foot, two-story home most closely fits that last descriptor, though there are traditional and even Mediterranean elements in the mix. A recent entry in the Spring 2015

Add yourself to our mailing list and receive information on upcoming Parade of Homes, as well as special promotions.